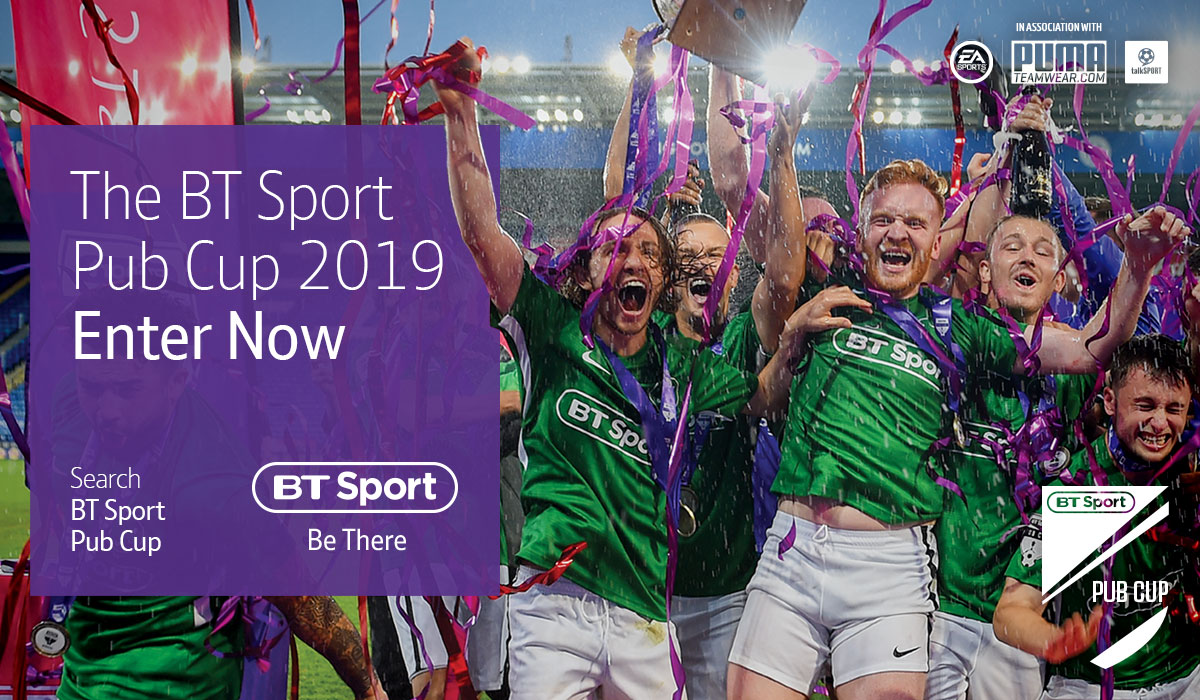 BT Sport, in partnership with Hospitality Ulster, has announced that the BT Sport Pub Cup will return for its third year, with this year’s tournament set to be the largest yet.

Following the success of last year’s competition, which was won by East London pub, The Gun, in thrilling fashion, the 2019 BT Sport Pub Cup will be open to more teams than ever before, with over 190 places up for grabs across a men’s and a women’s tournament*.

This year BT Sport will also be giving away a full Puma team kit for every BT Sport Pub team that enters the draw to compete**.

The free-to-enter competition, which aims to celebrate pubs and their football teams, begins on the 8th May with twelve regional qualifiers at stadiums across the UK, including Anfield - Liverpool, Selhurst Park – Crystal Palace, St. Marys - Southampton, Molineux - Wolverhampton, Stadium of Light – Sunderland , Liberty Stadium - Swansea and Windsor Park - Belfast, before the winning teams face off in the semi-finals at the state-of-the-art City Academy, home of Manchester City and with the final at Newcastle’s St. James’ Park on 4th June.

Bruce Cuthbert, director commercial customers, BT Sport, said: “This year we’re bringing back the BT Sport Pub Cup, bigger and better, with more teams able to take part and the biggest pub team kit giveaway ever.  Sport is such an important part of pub culture and this competition aims to strengthen the tie between licensees and their communities by offering a once in a life time experience to pub football teams up and down the country.”

Robbie Savage, manager of last year’s winners, The Gun, said of the 2018 competition: “It’s been very professional, very organised and a fantastic initiative to give these guys the opportunities to play at some fantastic venues.”

John Hartson, who managed last year’s finalists, the Liver Vaults said: “The Pub Cup is a great advert for all the pubs across the country and fair play to BT Sport for putting something like this on.”